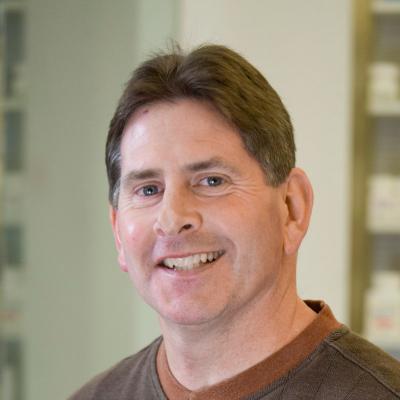 Growing up in New York’s Southern Tier, Michael Kane excelled at three things— math, science, and baseball. Figuring that the major leagues were a longshot, he followed the recommendation of his 11th grade guidance counselor who suggested he consider a career in pharmacy.

It turned out to be excellent advice for this graduate of the ACPHS Class of 1984. Dr. Kane, who specializes in endocrinology, with a focus on diabetes and osteoporosis, has taught at the College for 25 years. He also practices at The Endocrine Group in Albany, where he works with clinicians and precepts pharmacy students and postgraduate residents.

In the classroom, Dr. Kane facilitates two integrated problem-solving workshops for Pharm.D. students that are designed to develop skills related to critical thinking and teamwork – “skills that students will take with them into their fourth professional year rotations and then out in to practice,” he notes.

“By completing a rotation or a residency at The Endocrine Group, students and residents learn the complexities of endocrine management, especially diabetes. They also learn general internal medicine management and gain a deeper understanding of the many therapies we have available,” he says.

Dr. Kane’s students are directly involved in helping counsel patients considering various options for the management of osteoporosis, diabetes, and other endocrine and internal medicine disorders. Since Type 2 diabetes keeps company with so many other disease states, and because many patients’ primary care providers are at The Endocrine Group, students also gain experience with a host of other disorders including high blood pressure, high cholesterol, cardiovascular issues, obesity, osteoarthritis, and depression.

“People with endocrine disorders tend to present with an array of signs and symptoms, depending on the underlying disorder,” Dr. Kane says. “When you hear patients describe their symptoms or meet with them in person, you never forget it. When you see them again a few weeks later, after they have initiated therapy, you are able to witness firsthand the effectiveness of that therapy and how it helped them feel so much better. It provides an excellent learning opportunity.”

Pharmacy graduates who have completed year-long residencies with Dr. Kane have embarked upon a wide range of career paths. Some have taken academic positions with colleges or universities; several have chosen positions in hospitals or other clinically oriented environments; two practice in community pharmacies; and one of the earliest graduates of the residency program now runs a Diabetes Center in a Northern New York pharmacy.

Recently, Dr. Kane was awarded his 18th research grant since arriving at The Endocrine Group, a $45,000 grant from Bristol-Myers Squibb to study the effectiveness of the drug Bydureon (approved January 2012) for treating diabetes patients. He foresees opportunities for additional investigations as a result of the continuing rise in Type 2 diabetes. According to a 2012 study by the U.S. Centers for Disease Control and Prevention (CDC), the incidence of Type 2 diabetes in the United States has increased an average of 82% from 1995 to 2010.

“Unfortunately, the need for new diabetes treatments is not going away,” says Dr. Kane. “The 12th class of drug for diabetes treatment was just approved this past spring, and the research will not be slowing down any time soon. There is still plenty of work to be done.”