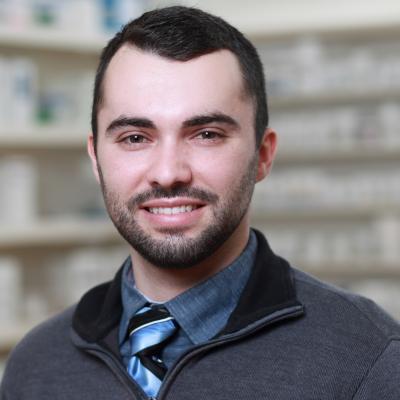 Native Vermonter Bear Berenback considered moving away to pursue his Pharm.D., but concluded that "being close to family was important to me. I felt I knew the area well and had a good professional foundation in place that I could build on."

That decision proved to be a good one for both Bear and the ACPHS Vermont Campus. The students, faculty, and staff of the College have all benefited from Bear's local knowledge, whether it's learning the best place to watch the sun set over Lake Champlain or discovering out-of-the-way swimming holes near Mt. Mansfield.

Bear's sense of community mindedness took root as a student at the University of Vermont, but it has blossomed during his time at ACPHS. "I wasn't always the first person to seek out leadership positions," he says, "but the close knit community here has encouraged me to take on more of that role."

In the same way he has benefited from stepping out of his comfort zone, he is now encouraging others to do the same. As President of the campus' Student Government Association (SGA), Bear requires each student group to partner with a student health care organization at another school on an interprofessional education event. "It's a great way to foster new ideas and emphasize the importance of collaboration in patient-centered care."

He's now employing a similar approach within the broader ACPHS community, working with his SGA counterpart in Albany, Reid LaPlante, on the development of an "exchange program" where students from one campus will be able to spend a semester living and studying on the other campus.

With the new three-year Pharm.D. program set to launch in June 2019 in Colchester, Vermont. Bear is now putting much of his energy into supporting this inaugural class of students.

"I know firsthand many of the challenges they will encounter, and I want to do whatever I can to help ease their transition. It's important that they know there is a bigger community here to support them."