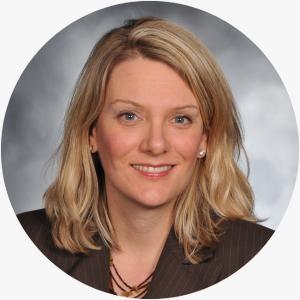 She has been a faculty member at ACPHS since 1999.  She started clinical pharmacy services as the ambulatory care pharmacist at Albany Medical Center’s Internal Medicine and Pediatrics Group in Latham, NY in 1999, and is an Adjunct Clinical Associate Professor in the Department of Medicine at Albany Medical College.

In addition to teaching students at her practice site, Dr. Garrison’s primary teaching responsibilities at ACPHS include the Cardiovascular Pharmacotherapy of dyslipidemia, hypertension, and cardiovascular risk assessment. She also teaches integrated problem solving workshops with students, and an elective course Updates in Pharmacotherapy.

Since 2012, Dr. Garrison has served as the Director for the ACPHS Teaching and Learning Program (TLP) for Pharmacy Residents which is offered to affiliated institutions. She has completed clinical certificate programs as a pharmacist immunizer trainer, smoking cessation specialist, and lipid management specialist. Dr. Garrison has also completed a national training program on motivational interviewing for patient communication.

Dr. Garrison is an active member of the American Association of Colleges of Pharmacy (AACP), Rho Chi National Honor Society, and the New York State Council of Health-System Pharmacists (NYSCHP).

As an active member of the American Association of Colleges of Pharmacy (AACP), she has been invited to serve on several AACP Council of Faculty committees and AACP Standing Committees. From 2010-2013 she served in leadership roles for the Association, including being elected Chair of the AACP "Women Faculty" Special Interest Group (SIG).

Nationally, Dr. Garrison has served as an officer for the Rho Chi National Honor Society, including election to two terms as Region 1 Councilor (2007-2011) and three terms as National Secretary (2012-13; 2013-2015; 2015-2017). Since 2005, Dr. Garrison has also been a faculty co-advisor for the award-winning Rho Chi student chapter at ACPHS, which has received four Rho Chi national awards since 2007 (two chapter achievement awards and two national chapter proposal awards).

At the state level, Dr. Garrison has served as NYSCHP Vice-President for Public Policy (Board of Directors, 2009-2011), and has been an active member of the NYSCHP Public Policy committee for many years where she regularly advocates for pharmacy practice.

Dr. Garrison serves as a Journal Reviewer for several journals including the American Journal of Pharmaceutical Education, Currents in Pharmacy Teaching and Learning(Elsevier), and the Journal of the American Pharmacists Association. She has been awarded several honors, including "Educator of the Year" by the New York State Chapter of the American College of Clinical Pharmacy (2005), ACPHS “Teacher of the Year" (2018), and ACPHS “Professioanl Organization Advisor of the Year" (2007 and 2009).  Dr. Garrison mentors pharmacy trainees to apply for the national Wal-mart Annual Conference Scholarship Program Award through AACP, and has won the award twice (2008, 2012).