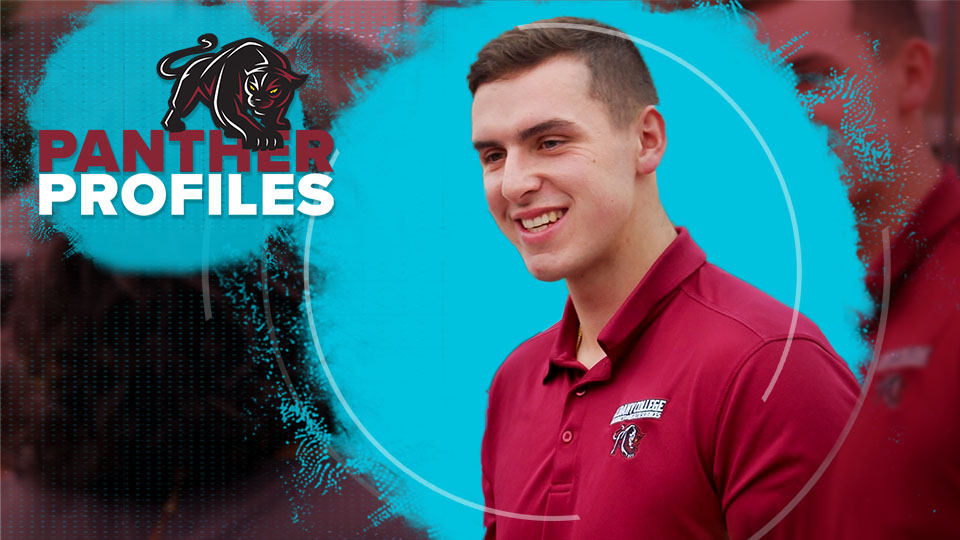 Panther Profiles are Q& A interviews that highlight Panthers of all stripes -- students, faculty, staff, alum, board members and anyone else in the campus community.

Dom Lomonaco, a Binghamton, N.Y. native, is a well-known student on the ACPHS campus. Some other students call him simply “The President,” and for good reason, due to his on-campus involvement including his role as president of the Student Government Association (SGA). He is pursuing a bachelor’s in pharmaceutical sciences with a minor in medical humanities and will graduate in 2024. Dom sat down to answer some questions about advice he has for new students, his favorite food in Albany and more.

What drew you to ACPHS?

When I came to campus, I initially thought I was just here to look at the school and I wouldn't really get much out of it. I had toured other colleges previously and it was kind of like that; you show up, you eat, they put you in a big lecture hall with everybody, they tell you everything about the school. But when my dad and I got here, we talked with some of the admissions directors and then we sat down and were approached by several students. It really surprised me when we had other students coming up and telling me, “Oh, this is a great program,” and they asked me questions. They really got to know me. The students actually cared, and it wasn't just one or two students, it was all of the student ambassadors. When the students would come up and have a conversation with me, it made me feel like a part of the community early on.

What are your goals after graduation? What are you looking to do with what you’ve learned at ACPHS?

I plan to go to medical school, but I haven't decided where. I do want to keep my options open because a lot of decisions are coming up. So, whether it's pursuing an M.D. (doctor of medicine), D.O. (doctor of osteopathic medicine), or if I decide to change my path drastically and do research for the rest of my life, who knows? I'm not sure which route to take. I'm taking it day by day, step by step. I'm kind of in that unknown spot. I've got my plan, but I've also got a couple side journeys that I could look at.

You’re majoring in pharmaceutical sciences. What made you want to pursue that?

When I was looking at the course offerings at ACPHS, I really saw how the courses in the pharm sci curriculum could help me advance as someone in science, both academically and improving my analytical skills. It teaches a lot of critical thinking. I think that's what I was drawn to more, the critical thinking aspect and how pharm sci makes you look at things a little differently. There's a lot of applications to pharm sci as opposed to just learning it and reciting it. I saw the opportunity that I could get involved in research early on, and I really took it.

In past conversations, you said that as a new student, you wish you had known how helpful professors are. What advice do you have to help new students connect with their professors?

I know it can be pretty intimidating to go to office hours. My suggestion would be to email your professor and start a conversation. That's what I've done. I've started the conversation over email and that has led to an easier introduction face to face. I know a lot of students can get nervous when they knock on a professor’s door. If you have that email communication first where you kind of get your foot in the door, it makes it a little easier to segue into having a sit-down meeting. And then from there you can email to set up appointment times, but the face-to-face meetings have become more valuable.

Have you found that the professors here are really open to helping all of their students?

Definitely! I think that is one thing that the college prides itself on. We can say we execute because all of the professors here really want their students to be successful. And we've seen that through this year, classes have transitioned back to fully in-person. We see that the professors are helping the students become acclimated to the new campus atmosphere.

That’s great! Outside of the classroom, we know you’re the President of the SGA. What other organizations are you involved in?

I’m the president of the American Medical Student Association, or AMSA, here on campus. We host different events and historically we've done dissections. This semester we had the opportunity to do a cat dissection. The club used to do heart dissections and lung dissections. This was kind of a switch up. We wanted to see the full anatomy of the animal and how it compares to the human anatomy.

We’ve also been joined by the U.S. Army. They came in and they did tourniquet training. Students were able to learn how to use tourniquets, learn about their effectiveness and purpose, and get a certification for the Stop the Bleed training. We also offered Narcan training for overdose prevention with Dr. (Jacqueline) Cleary on campus. We did a suture clinic and, in the future, we're going to collaborate with the U.S. Army to bring in their professionals to teach our students how to do that. And we’re going to do it on a regular basis. We also do a lot of advocacy as well with physician rights and public health rights as well as voter rights, encouraging patients to vote. We hosted a voter registration event where we helped over 35 students on campus register to vote, which I think is a great number given our campus population.

What’s your favorite spot on campus?

The Biosciences Research Building – the  BRB. It’s the location of all the pharmaceutical science faculty offices and their labs. But a new addition that Dr. Richard Dearborn, the chair of the department, implemented is an arcade chest in the lobby area. He really likes arcades and wanted to make this a relaxing spot, a spot for students that want to come and hang out and step away from their work to play some video games. I think it’s a great addition because it’s loaded with like 300 different games, and you just pick a game and play as long as you want. There’s a little scoreboard so there’s a couple of games that people get pretty competitive with. It’s a nice way to step away from classes. It makes it a little more relaxing and chill in that area.

Do a lot of students use it?

I think so. I know that whenever I’m at the building, there’s people using it. I do see people crowded around it and then I’ve also seen professors using it. It’s funny to walk into the lobby and see a professor playing an arcade game.

That’s fun and shows the personality of some of the professors here. To get to know a little bit more about your personality, we have to ask, what are your favorite places to eat in the Albany area?

There are so many that it’s hard to pick off the top of my head. I love getting sushi from Wasabi Unlimited sushi, all you can eat. That’s probably one of my favorite things to do with my friends. Another place is El Loco right on Madison Ave. It’s an awesome Mexican place. Great. There’s one place off of Pearl Street called Banh Mi 47. It’s Vietnamese cuisine. I saw it on Grubhub one day and I've been getting it pretty consistently. So that’s another one too. It’s quick and easy. And then there's also a couple deli and convenience stores that are like bodegas. They’re hidden gems in Albany.