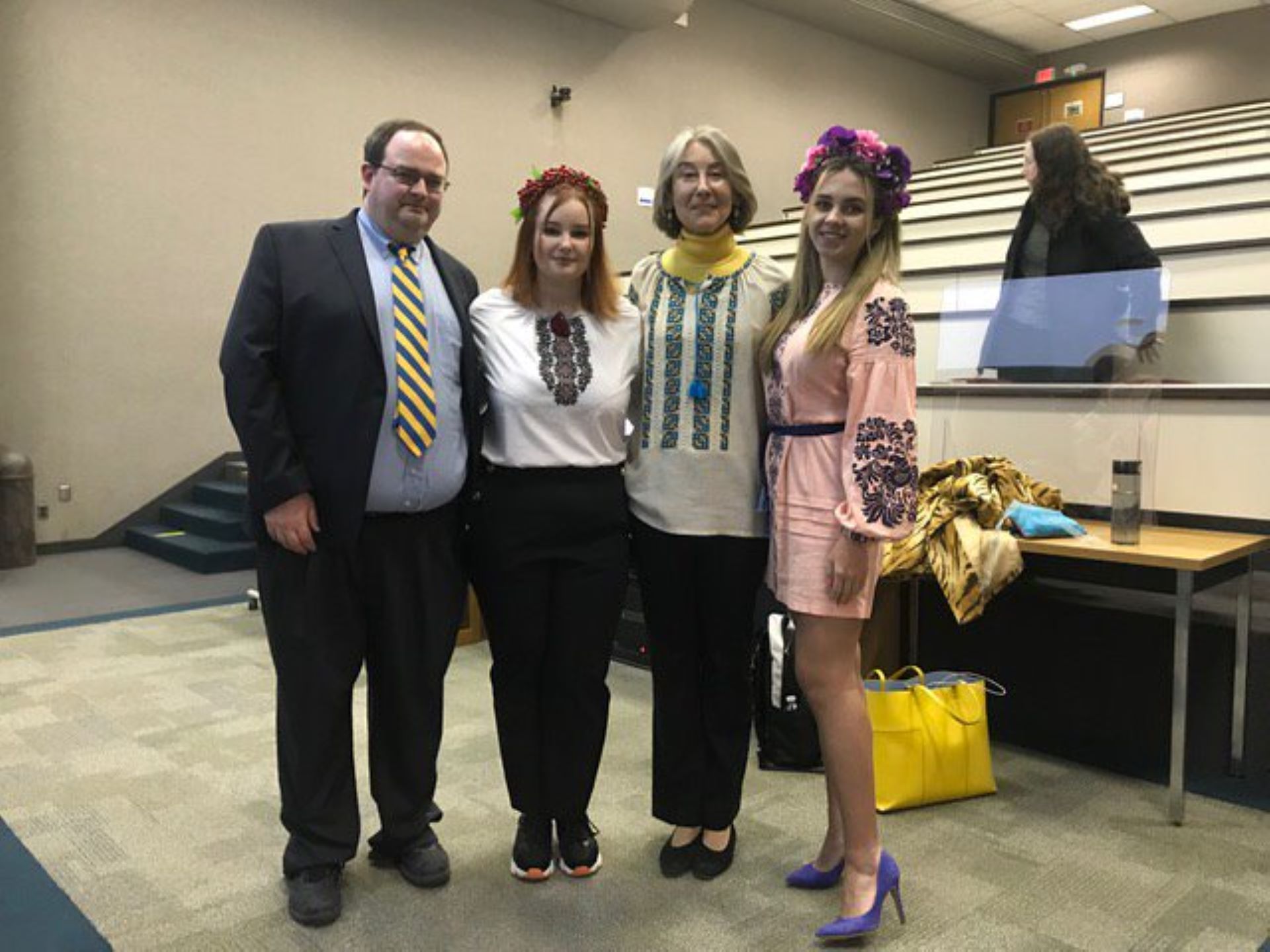 ACPHS GATHERS IN SUPPORT OF UKRAINE

As the Russian invasion of Ukraine continues to stun citizens in Eastern Europe and around the world, ACPHS students recently organized an open forum for the campus community to reflect upon the growing humanitarian crisis.

The campus forum titled, Ukraine: The Head of Europe, held on Tuesday, April 5, was moderated by Dr. Nadia Kizenko, professor of history at the University at Albany. The presentation provided a historical survey of Ukraine and included information about the country’s long-standing and complicated relationship with Russia. The forum was hosted by SGA and organized by the Department of Population Health Sciences with support from Daniel Smith.

ACPHS President Dr. Greg Dewey began the event by sharing his personal observations with attendees. “My first observation is surely this cannot be happening. I thought our civilization was at a level of sophistication, a level of economic integration that prevented these old-style conventional wars from happening. These are things that you read in history books, and yet they're happening today.” Dr. Dewey continued, “we're all in this together,” and recited the John Donne poem “No Man is an Island,” concluding his comments by stating, “the bell is tolling in Ukraine and it's tolling for us, so I want to thank you all for your advocacy here during this very critical tragic historic time.”

Viktoriya Yatsiv, a third year Public Health student, and a native of Ukraine, has studied at ACPHS for three years and has lived in the United States for eight years. In a conversation leading up to the forum, Viktoriya explained how her heart is aching for the people of Ukraine, including family members who are directly affected.

“I have experienced feelings of guilt, anxiety, and worry. My grandparents are there, and it is overwhelming to see the news reports of the devastation. I call my family every day, and they express their fears about the war; they never know what is going to happen next, or how much help will they receive,” Viktoriya said.
“During the first few days of the invasion, it was very hard for me to concentrate on my studies. Since then, I’ve received help from many people at ACPHS, and I’m hoping to help with information awareness; to share information about what’s happening in Ukraine,” she continued.

Yuri Kholodenko, Associate Professor of Physics at ACPHS was born in Kiev, and has relatives living in Ukraine, including some whom have fled to find safety in Moldova. Prof. Kholodenko described how residents of neighboring countries are assisting Ukrainians. “The generosity and support of people in the greater Eastern European region is universal, and people in neighboring countries are accepting Ukrainian refugees with little hesitation. Everyone is helping,” he said.

Diana Byk, a P1 Pharmacy student was raised in Western Ukraine. She spoke about her volunteer work with the Ukrainian National Women’s League of America (UNWLA) chapter based in New Jersey. “UNWLA is a women’s organization, but there was a lot of help from American males and females, especially providing humanitarian supplies...fundraising, and donating packages to provide medications,” Diana said. The New Jersey branch has raised over three million dollars to assist Ukrainians in need.

In recent conversations with students and faculty, SGA leaders determined a forum would be a helpful way for the ACPHS community to come together, support one another, and discourage misinformation.

Throughout Ukraine's history, the sunflower, the country's national flower, has been recognized as a symbol of peace. So, SGA thought it was fitting to distribute sunflower seeds to ACPHS community members during tabling events leading up to the forum.

Soo Kang, president of the ACPHS Student Government Association (SGA) said, “SGA realized we must stand with our community to help those who have been either directly or indirectly affected. We knew we could not do this alone, and it made a world of difference when faculty and staff members joined efforts. I would like to personally thank Dr. Dewey, Professor Smith from the Department of Population Health Science, SGA E-Board and Library Services for their support in making this possible. We hope that the actions we have taken will help our community to move forward and bring our campus together.”

For more information about Ukrainian National Women’s League of America (UNWLA) or to make a donation, visit https://unwla.org.