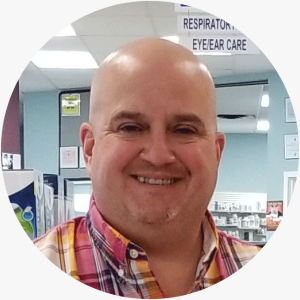 In this episode of Occupation Station, meet Dan Bosley, class of '93 ACPHS graduate and now owner of two independent pharmacies, Keeseville Pharmacy and Cornerstone Drug and Gift in Rouses Point, NY. Dan always knew he wanted to be a pharmacist but didn’t originally picture himself going solo. Yet Dan was attracted to the freedom associated with working independently. He loves being able to bypass the red tape often associated with retail chains so that he and his staff can provide immediate assistance to his patients. Dan also says independent pharmacists are much more agile when it comes to trying out new solutions to healthcare needs in the community, putting them on the cutting edge of the pharmacy profession. Case in point, Dan has become hyper-connected to his local community through his Farmacy. He credits ADK Action with sparking and then supporting a plan to bring a local farmers market to his pharmacy. This eventually led to a permanent section of his pharmacies devoted to locally-sourced fresh foods available for his customers. He says the ultimate goal is matching nutrition with health goals to improve the lives of patients who may be diabetic or have other conditions that would benefit from dietary changes.

Listen to "From ACPHS to Independent Pharmacy Owner" on Spreaker.