Launched in 2005 by ACPHS Associate Professor of Africana Studies Kevin Hickey, the annual Africana Film Series has developed into a signature event on the College calendar.

Held each February in conjunction with Black History Month, the Series features three films shown on successive Tuesdays that are built around a theme selected by Dr. Hickey. A discussion follows each screening exploring the various elements of that evening's film and how it fits into that year's theme.

Each showing includes food, drink, a write-up on each film, and post-film discussion. The entire series is free and open to the public.

Scroll below to view the themes and films from the Series' history.

"Africans in the Caribbean"

Despite how most of the world thinks about the Caribbean, it is a rich and vibrant collection of diverse cultures, geographies, and complex histories. In this, the 16th year of our annual film series, we will look at “Africa” in three locations: Columbia, Cuba, and Curacao.

Colombia’s 2014 Oscar entry, La Playa D.C. takes place in Colombia’s capital city of Bogotá where we follow three brothers caught between the push and pull of the civil war in the western part of Colombia and the dominating culture and economy of the USA referred to as el Norte. The film focuses on the middle brother (thirteen-year-old Tomas) and his coming of age as an apprentice barber specializing in the intricate cuts popular in a hip-hop-influenced poor section of the capital city.

After La Playa DC, there will be a showing of "Four Years--Crossing Africa by Bike" (photo slideshow with music) followed by a short period for questions

Our second film for 2020 is from the man referred to as “the father of Afro-Cuban cinema” Sergio Giral from whom we will watch the final film (Maluala) from his famous “slave trilogy.” This iconic film clearly flavored by the politics and cinematics of the 1970s brings a “black power” perspective to the late 18th and early 19th century struggles of communities of runaway slaves (cimarrones in Spanish; maroons in English) living in the mountains of eastern Cuba where they are struggling for freedom against the Spanish government and the Catholic Church. 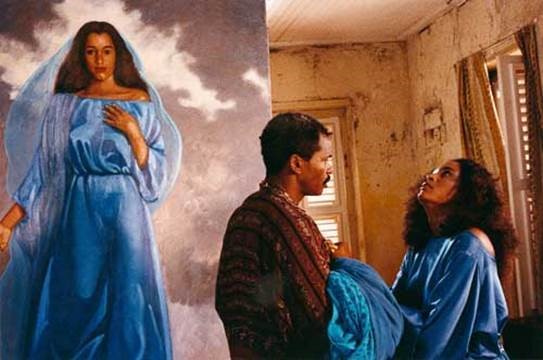 Our final Afro-Caribbean film is from Curacao and looks at prejudice and identity.

The parish priest of St. Anna’s on Curaçao (ruled by Holland) requests a painter to create a mural of the Virgin Mary. The church in Holland sends the parish an Afro-Caribbean named Gabriel Goedbloed from Surinam (also ruled by Holland) but who has been Dutch-educated and who chooses a “mixed race” teacher on the island (Ava) as his model for the Virgin. The model is engaged to the white police major who does not like the idea of his fiancé posing for another man. The Dutch Governor’s wife becomes interested in the painter. For the conservative people on Curaçao, none of this should be happening.

THEME: Africans in the Caribbean

THEME: On the Margins