Associate Professor is Inspiration for Award 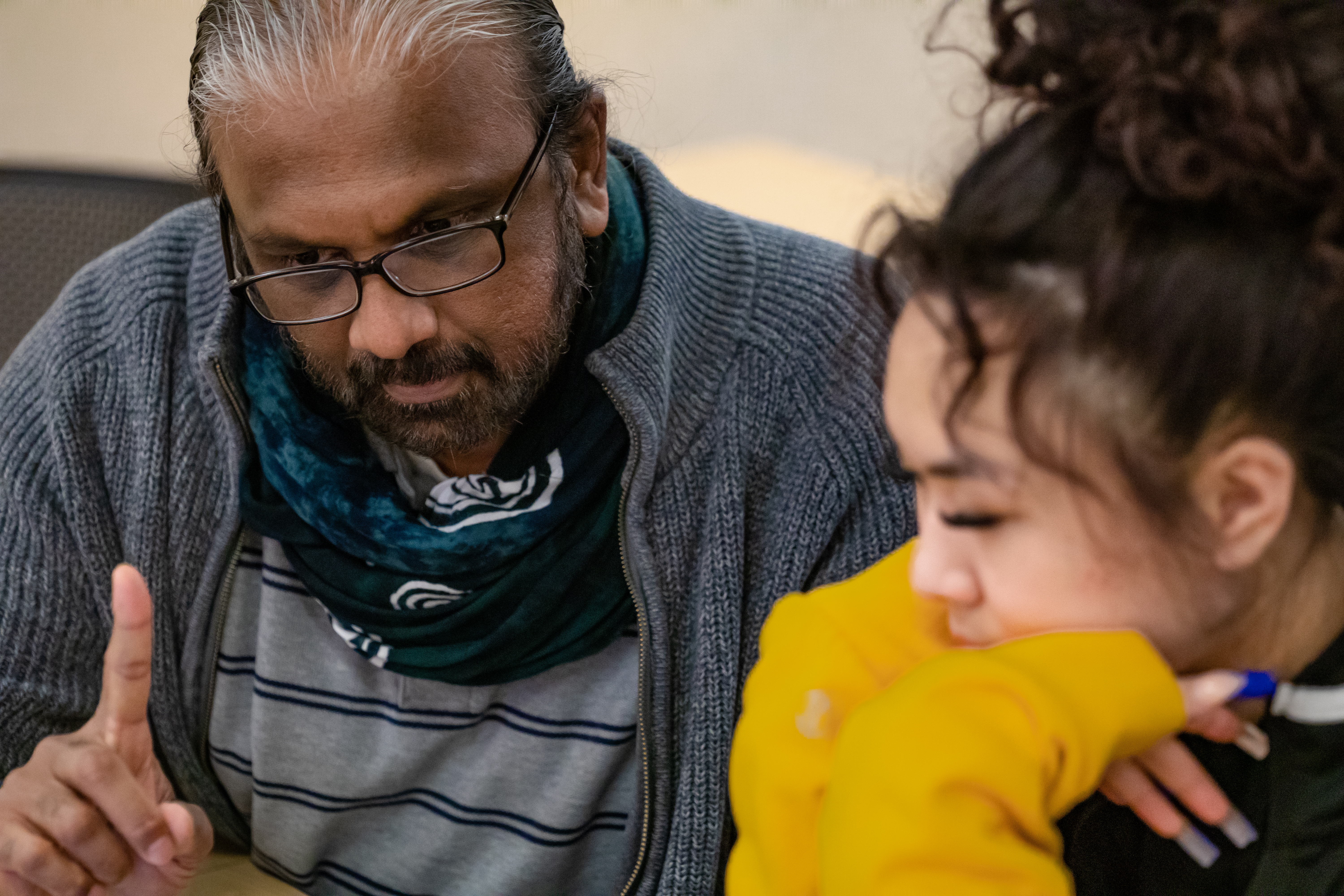 Tomasello Riccio changed subtly when asked about Dr. Ray Chandrasekara following the ACPHS Fall 2022 Student Honors Ceremony on Dec. 1. Riccio had just received the Be The Change Award, a.k.a. the “Dr. Ray” Award, created in honor of Chandrasekara, a beloved associate professor of humanities.

How did he feel about receiving an honor inspired by Dr. Ray? Riccio’s head tilted upward slightly, his tone softened and his already wide smile broadened.

“He’s a role model to everybody,” Riccio said about Chandrasekara. “I really wouldn’t be where I am without him.”

Nathaniel Lee, who shared the $2,900 award with Riccio, responded similarly to the same question. “He motivates me to be better every day,” Lee wrote in an email. “I hope to inspire others in the same way!”

Ask students past or present about Chandrasekara and that is the type of response you get. That’s one way to measure the faculty member’s positive influence.

Another is to consider the very creation of the Be The Change award, established by the Class of 2011.  Almost two dozen sixth-year pharmacy doctorate students, having just amassed substantial debt and without full-time incomes, each committed to contributing funds to establish the endowed scholarship, which required a total minimum of $25,000. Most of the students gave $2,500 each.

“His availability and selflessness are why we all felt compelled to contribute something,” Dr. Nathan Rogers ’11, said about Chandrasekara.

At the ACPHS annual Honors Ceremony, awards are bestowed on the College’s highest achieving students, top performers in academically rigorous programs.  Most of the 19 awards are based strictly on grade point averages, with the winners chosen by hair-splitting differences in near-perfect scores, according to Honors Award Committee Chair Dr. Shawn Phillips ‘18, an assistant professor in Pharmacy Practice.  A couple of the awards stand out as they are based on something other than GPA; Be The Change is one of those.

The award provides scholarships to students who demonstrate traits like dedication to the College, commitment to service, tolerance, lightheartedness and selflessness (see the complete list of qualifications below).  In other words, according to a couple of its founders, it rewards characteristics modeled by Chandrasekara.

Rogers is one of the Class of 2011 who helped establish the award. A native of the rural New York town of Brookfield, Madison County, where there was little diversity, Rogers did not initially know what to make of the professor of Malaysian descent with “a crazy English accent.” He soon learned that in Chandrasekara’s classes, he would learn not just about the subject matter but also about values like embracing differences.

Rogers recalled that it was Chandrasekara who helped him through the challenge of adjusting to College in his first year. He was having what he described as “near panic attacks” over being away from home and taking on the rigorous academic workload of a pharmacy doctoral degree. So he gave up something he had always loved, sports, in order to keep up with academics.  It was Chandrasekara who saw Rogers’ struggles were exacerbated by having given up athletics, and he encouraged Rogers to resume his physical activity to improve his mental health.

Rogers acknowledged that he could have gotten this kind of advice from the Office of Counseling and Wellness but said he would never have sought it.  It took Chandrasekara’s personal interest in his well-being and his outreach to get Rogers on track.

What later surprised Rogers was understanding that Chandrasekara’s interest was not special to him – the associate professor took this kind of interest in every student.

“He’s selfless as can be,” Rogers said.

Another award founder, Dr. Amar Patel ’11, also talked about learning tolerance in Chandrasekara’s classroom.  It was there, he said, that students could take risks in expressing unpopular opinions.

“Dr. Ray ended up giving us the confidence, the safe place, to be valued and respected,” Patel said. “More than anything, he allowed us to exchange ideas without ever being hurtful or hateful.”

It was Chandrasekara’s own teachings that led the class to establish the award, Patel said. The Class of 2011 had some gripes during their tenure. Chandrasekara taught them that they should remain grateful to the College and work to remedy the problems they saw.

And that how the award was named, after a quote from Mahatma Gandhi: “Be the change you wish to see in the world.”

Chandrasekara was humble when asked about the award, saying that as faculty, he could only facilitate the process, not drive it.

“I think it’s marvelous that they decided to do this,” he said. “And I’m always grateful to their commitment.”

Be The Change Award criteria

Applicants must submit an essay. The award provides a scholarship to a student who: