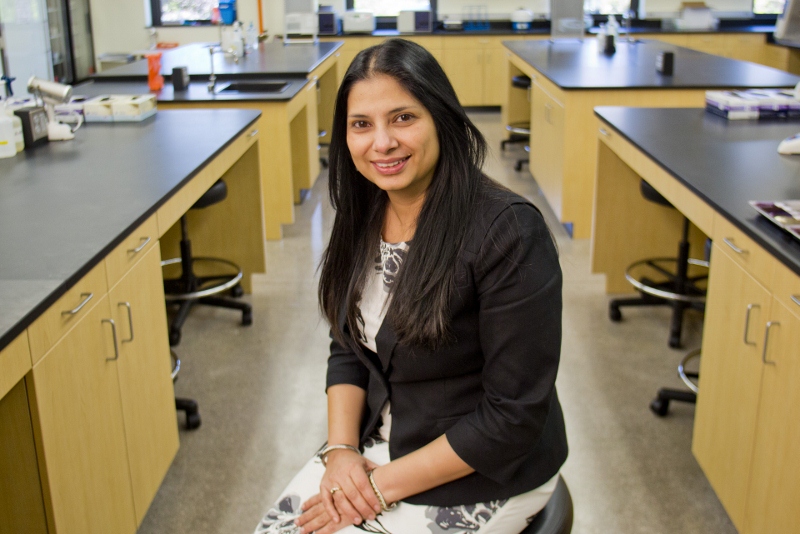 Associate Professor Meenakshi Malik has been awarded a three-year research grant totaling $480,000 to expand her study of Francisella tularensis, a bacterium that causes a potentially fatal disease called tularemia. The grant is being funded by the National Institute of Allergy and Infectious Diseases (NIAID) of the National Institutes of Health (NIH).

The grant is the “competing continuation” of a previously-funded NIH research grant that Dr. Malik received in 2013. Competing continuations of NIH grants are difficult to secure, with renewal decisions indicative of significant contributions to the peer reviewed literature during the previous grant period (see below).

Another area evaluated in determining whether to renew a grant is the investigator’s ability to train undergraduate and graduate students in these fields. Dr. Malik, who is a member of the Department of Basic and Clinical Sciences, has a long history of mentoring students in the lab, and this new grant will enable more ACPHS students to gain meaningful research experience, especially those in the College’s B.S. in Microbiology and M.S. in Molecular Biosciences programs.

“Highest Risk to the Public and National Security”

Francisella tularensis has been classified by the Centers for Disease Control as a Category A bioterrorism agent. Organisms or toxins in this class are defined as “posing the highest risk to the public and national security.” Other Category A agents include pathogens causing anthrax, plague, and smallpox.

Francisella tularensis is particularly dangerous because it can be easily aerosolized and survive in small droplets for prolonged periods of time. If infected and left untreated, the mortality rate can be as high as 60%. Currently, there is no FDA approved vaccine for preventing tularemia.

If someone becomes infected by a disease-causing organism, the body’s immune system instinctively responds as the first line of defense. But with Francisella tularensis, the immune response is effectively muted in the first 48-72 hours following infection, thereby inhibiting the body’s ability to successfully fight off the bacterium.

The focus of Dr. Malik’s first NIH grant was to explore how Francisella tularensis stifles the immune system and try to determine what causes the protective immune response to “kick in” after this initial period.

Over the course of this grant, Dr. Malik’s lab found several genetic factors that play a role in temporarily disabling the body’s initial immune response to a Francisella tularensis infection. Upon identifying these factors, Dr. Malik removed the genes encoding these factors from the bacterium and saw the immune response improve – an encouraging sign that may begin to point the way towards the development of a vaccine.

Over the period of the grant, she authored six publications in peer reviewed journals including Molecular Microbiology and the Journal of Biological Chemistry. Five different ACPHS undergraduate and graduate students earned listings as co-authors on the six publications. Her findings and related publications in part led the NIH committee who reviewed her new grant application to write, “the productivity during the last project period [was] outstanding.”

In parallel with these efforts, she will continue searching for additional factors that may be responsible for muting the body’s initial immune response to a Francisella tularensis infection.

“The challenge with Francisella tularensis is that very little is still known about how this bacterium causes immune suppression. As soon as we discover a few factors responsible for muting the body’s immune responses, we find out that this pathogen possesses multiple redundant mechanisms to circumvent our actions and shut down the body’s defense systems. It has been challenging to understand these mechanisms, but we are making progress.”

“Results [of Dr. Malik’s research] could have a major impact on the development of immunotherapies and vaccines against this select agent (Francisella tularensis) … The enthusiasm is very high for this application from an outstanding investigator.”

About Albany College of Pharmacy and Health Sciences
Founded in 1881, Albany College of Pharmacy and Health Sciences is a private, independent institution with a long tradition of academic and research excellence. The College is committed to educating the next generation of leaders in the health care professions and translating scientific discoveries into therapies that benefit humankind. In addition to its doctor of pharmacy program, ACPHS offers five bachelor’s programs and five graduate programs in the health sciences. The College has campuses in Albany, New York and Colchester, Vermont. For more information, please visit www.acphs.edu.