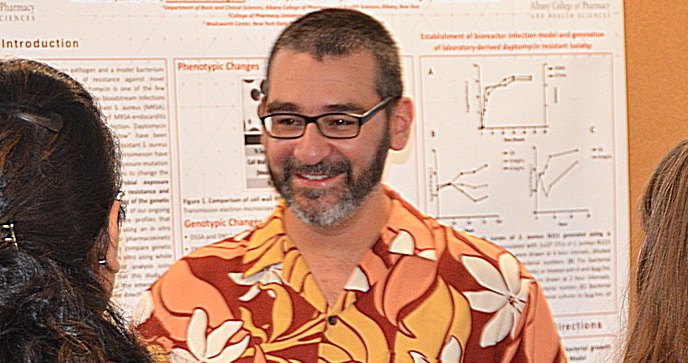 Assistant Professor Tim LaRocca has been awarded a three-year research grant totaling $480,000 to study a specific type of red blood cell death (called “necroptosis”) and explore ways to influence this process. The grant is being funded by the National Heart, Lung, and Blood Institute of the National Institutes of Health.

The results of this work may one day help inform new therapeutic approaches to treating blood related disorders such as anemia or preventing negative outcomes associated with blood transfusions.

Dr. LaRocca joined the College's Department of Basic and Clinical Sciences in January 2015 following a postdoctoral fellowship at Columbia University in New York City. He is currently mentoring ACPHS students in his lab, and this new grant will enable more ACPHS students to gain meaningful research experiences, especially those in the College’s B.S. in Microbiology and M.S. in Molecular Biosciences programs.

Our Bodies, Our Cells

Cells are often referred to as the building blocks of life, and every cell in the human body needs oxygen to function. To put it another way: without oxygen, there are no cells; and without cells, there is no life.

The source of this oxygen is the air we breathe, which enters the lungs and is transported to the cells and tissues of the body by red blood cells. This essential activity is why red blood cells play such a critical role in all of our lives.

Red Blood Cells vs. Other Cells

Most of the cells in our body die and are replenished on a continuous basis. As cells age and begin to deteriorate, they undergo a process called senescence. During senescence, certain signaling proteins are activated within the cell, initiating a programmed series of actions that gradually lead to the cell’s death. It is a highly organized and systematic process.

Red blood cells, however, are fundamentally different from other cells. They do not have nuclei (and therefore, no DNA) nor do they have mitochondria. For these reasons, red blood cells were long believed to be incapable of cell signaling. Their death was thought to happen in a more random, unstructured manner.

It wasn’t until the beginning of the 21st century when researchers first discovered that red blood cells also experience a type of programmed death called eryptosis. This finding has caused the scientific community to reevaluate long held beliefs about red blood cells and suggests they are more similar to other cells than what was originally thought.

As a postdoctoral researcher at Columbia University in New York City, Dr. LaRocca was studying bacterial “pore forming toxins” or PFT’s. These toxins, which are produced by bacteria such as S. aureus, Listeria, and Streptococcus, poke damaging holes in cells that often lead to their premature death.

As Dr. LaRocca was observing the interaction between PFT’s and red blood cells, he noted something unexpected. The red blood cells attacked by PFT’s experienced a type of programmed death – but one that was different from eryptosis. This particular type of death is called necroptosis, and Dr. LaRocca’s discovery of red blood cell necroptosis serves as the basis for this grant.

A person lacking enough healthy red blood cells to transport oxygen throughout their body will develop symptoms that can range from mild fatigue to chest pains to, in extreme cases, organ or tissue damage.

The focus of Dr. LaRocca’s grant will be two-fold: (1) Studying the various stages that red blood cells undergo when they die from necroptosis, and (2) Exploring the role of red blood cell death in the death of neighboring cells such as white blood cells and endothelial cells (this phenomenon is referred to as “bystander cell death”).

A deeper understanding of how these processes work could lead to new approaches for preventing premature red blood cell death, and in the process, improve treatments for patients suffering from bacterial blood infections and other blood related disorders. This knowledge may also be valuable in helping avoid adverse reactions to blood transfusions.

“If we fail to maintain a healthy supply of red blood cells in our bodies, then we run the risk of developing a range of undesirable health outcomes,” said Dr. LaRocca. “Understanding the mechanisms and outcomes of red blood cell necroptosis may play a key role in developing new therapeutic treatments to reduce or eliminate a variety of threats to human health.”

About Albany College of Pharmacy and Health Sciences
Founded in 1881, Albany College of Pharmacy and Health Sciences is a private, independent institution with a long tradition of academic and research excellence. The College is committed to educating the next generation of leaders in the health care professions and translating scientific discoveries into therapies that benefit humankind. In addition to its doctor of pharmacy program, ACPHS offers five bachelor’s programs and five graduate programs in the health sciences. The College has campuses in Albany, New York and Colchester, Vermont. For more information, please visit www.acphs.edu.