Researcher Seeks New Way to Get HIV Out 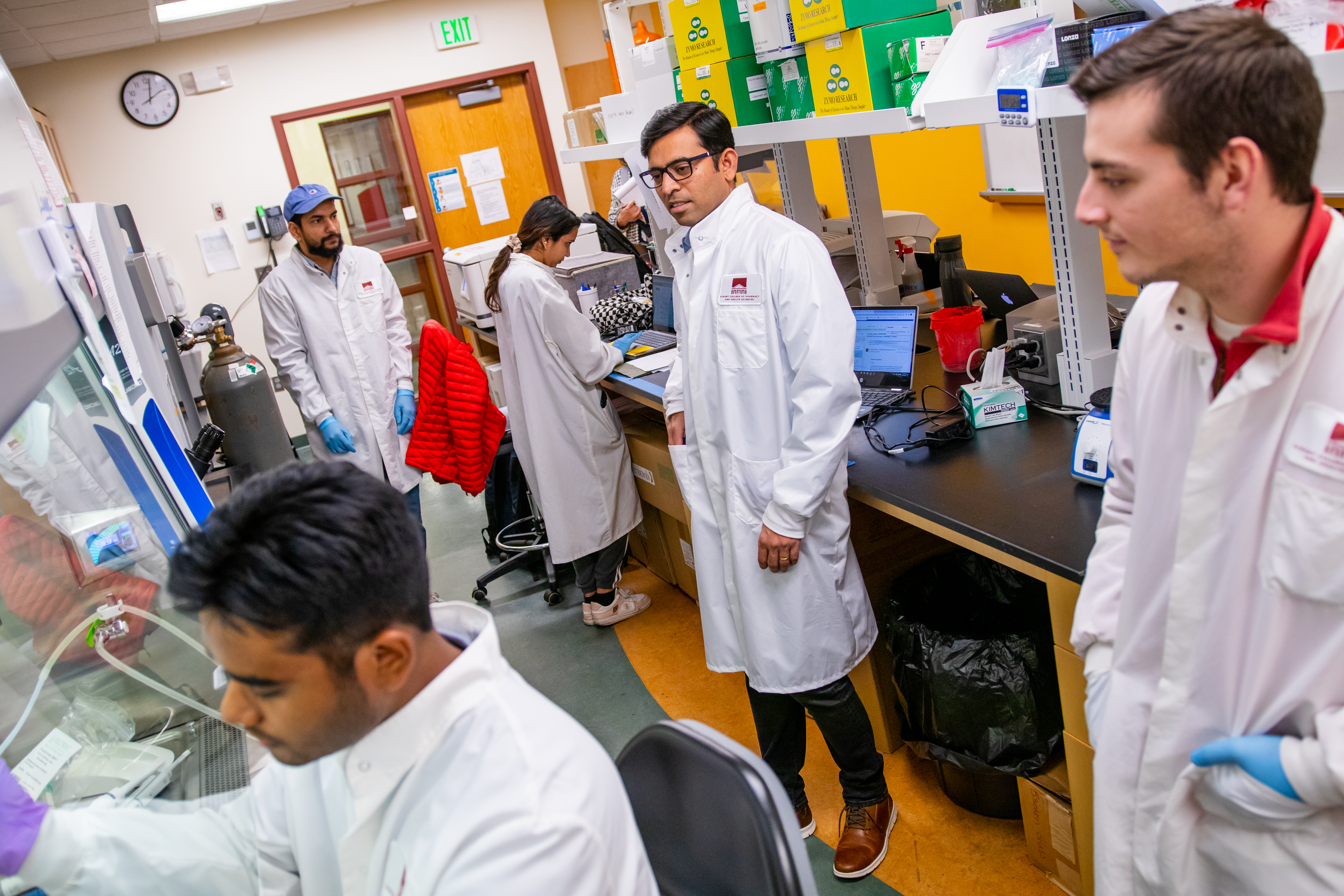 Assistant Professor Vir Singh uses memorable phrases for the approaches taken by the scientists like him engaged in an ambitious quest – to cure HIV, or at least put the virus into a coma.

He calls his biggest project, supported with a three-year, $495,000 grant from the National Institutes of Health (NIH), a path to “shock and kill.” Research he has initiated in hopes of a future grant is part of a strategy called “block and lock.” These monikers make his earlier HIV studies, regarding a mechanism he referred to as “push and pull,” sound tame by comparison.

Singh, who is personable and polite, would hardly strike one as a natural-born killer or even a jailer, for that matter. But it’s HIV he is after, so he’s not holding back.

Some 38 million people worldwide have human immunodeficiency viruses (HIV), including almost 1.2 million Americans over age 13. Once someone acquires HIV, they have it forever. Treatments can keep the virus undetectable and untransmissible so that someone with HIV feels relatively healthy and cannot spread the infection. But even when the virus is completely undetected by blood tests, it is still there, hiding deep in cells’ DNA, like a stealth attacker waiting for the body to let its guard down. In the case of HIV, that guard is consistent treatment. If treatment stops, the virus surfaces from its hiding place and flourishes again.  If left untreated, HIV leads to AIDS, which is often fatal.

The “shock and kill” strategy boils down to this: If you can shock the latent virus out of its hiding place, then the treatment a patient is receiving could kill it.

That is, in a word, a cure.  It would constitute a milestone entirely novel since AIDS was identified about 40 years ago – not just managing the illness but eliminating it. Treatment would no longer be necessary. Patients would no longer have to endure side effects as serious as heart disease, neurocognitive impairments and accelerated aging as the price for staying alive.

To get there, Singh and his team are attempting to advance scientists’ ability to answer this question: how to administer the shock that will draw latent HIV out from hiding and express itself so that body’s immune system and antiretroviral therapy can together eliminate the virus permanently. His NIH grant from the National Institute of Allergy and Infectious Diseases focuses on a heretofore unexplored possible method, by looking at the potential role of the enzyme RNA Polymerase III (RNA Pol III) in establishment of HIV latency in a type of infection-fighting white blood cells known as CD4+ T cells.

In preliminary work done to secure the grant, Singh and his team showed that inhibiting RNA Pol III did indeed result in reactivation of latent HIV cells.

“The shock is working,” Singh said.

Not many researchers other than Singh have considered RNA Pol III’s potential role in HIV latency.  Singh came upon the idea not because he was a long-time HIV researcher, but precisely because he had first developed expertise in other areas, including gene regulation, the effect of epigenetic modifications in a rare disease and cancer.  His journal reading reflected these varied interests. After he began his second postdoc in HIV research, he was reading an article about RNA Pol III, which may bind to a DNA sequence often present near the site where HIV integrates. He wondered why HIV researchers had not considered the enzyme’s potential impact on the virus’s latency, though they had examined the role of a related enzyme.

“I came with a different perspective, looking at this problem,” Singh said.

Singh found his way to HIV research when he joined a lab at the University of Rochester Medical Center (URMC), where his wife, Dr. Meera Singh, works. He continues to work with the scientist who recruited him and became his mentor, Dr. Sanjay Maggirwar, now at George Washington University.

In this continuing collaboration, Singh has an NIH subcontract for HIV research, for $96,000, examining HIV’s ability to penetrate the blood-brain barrier (BBB) and thereby cause damage to brain tissue.  Singh and his team have theorized that HIV triggers a "push and pull” mechanism throughout the course of infection. Initially, platelets “push” infected white blood cells into the brain, causing neuroinflammation that leads to production of proteins called chemokines. The chemokines then “pull” or attract more infected and activated blood cells over the BBB, exacerbating damage to the brain tissue that began with the “push.”  Continued “push and pull” may cause progressive decline in neurocognitive function.

Next on Singh’s exploration of HIV latency is to contribute to block-and-lock approaches to a functional cure.  If latent HIV could be seen to be in a deep sleep, “block and lock” aims to force it into latency so very deep it would be analogous to a coma, incapable of reawakening. It would not result in an actual cure – absence of the virus – but would allow the patient to live healthy without further treatment.

In Singh’s lab at the Francis J. O’Brien building at ACPHS, a team of seven work on these exciting research projects. The $495,000 NIH grant that supports the bulk of their work is part of the highly competitive NIH Research Enhancement Award program, intended for institutions that have not been major recipients of NIH support.

The team takes healthy CD4+ T cells and infects them with HIV, then allows enough time to pass for the HIV to become latent and hidden within the cells’ DNA. Next, they challenge the cells by inhibiting RNA Pol III. The team can see on a computer screen that the HIV has been reactivated when grape-like bunches of CD4+ T cells turn varying shades of fluorescent green.

Dr. Imran Jamal (pictured above, second from left) runs the lab’s day-to-day operations. Like Singh, Jamal found his way to HIV research from another path; he had previously researched a rare genetic disease, as well as neuropathic pain induced by drugs to treat cancer, and became interested in HIV’s effect on the brain. By contrast, another researcher, 26-year-old pharmaceutical sciences master’s student Anisha Paudel (pictured third from left), has been laser focused on entering the HIV research field for the last nine years, since she was a high school student in Nepal.

Back then, a nurse friend shared with Paudel her experience caring for a woman infected with HIV who died because she received no treatment. In Nepal at that time, access to treatment was often denied to people with HIV because a stigma was attached to the disease, and its victims were blamed for their suffering, Paudel said. But Paudel understood the woman to be blameless. On the other hand, the woman’s husband had engaged in extramarital sex, infected his wife, and received treatment in another country.

“From that moment, I got interested: I have to work on HIV,” Paudel said. “The urge to know how we can cure these debilitating life-threatening conditions paved the road towards Dr. Singh's lab.”

It was a big shift coming to ACPHS from URMC, one of upstate New York’s largest research facilities, said Singh, who is 40.  His wife and their 8-year-old son remain in Rochester, and he sees them on weekends.  Singh said he has high-quality time with them when he is home.

The commute also provides him with an opportunity that would not be available at a larger institution, he said.

“It’s always good to be independent and do what you want to do and get funded for that and be credited for that,” Singh said.