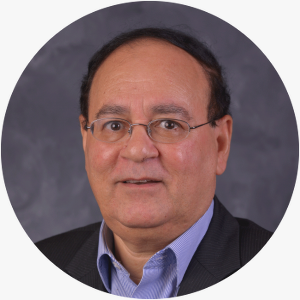 Pharmaceutical Research Institute (PRI) Executive Vice President and Chairman Shaker A. Mousa, Ph.D., MBA, FACC, FACB, has demonstrated throughout his distinguished career the ability to bring novel concepts from "the bench to the bedside."

Dr. Mousa came to Albany College of Pharmacy and Health Sciences in 2002 following a career of more than 17 years as a principal research scientist at DuPont Pharmaceuticals Co.

Among Dr. Mousa's professional accomplishments are his contributions to many patents – he holds more than 250 U.S. and international patents  – and to the discovery and development of novel anti-platelet, anti-thrombotic therapies, non-invasive myocardial perfusion and thrombus imaging agents. His work has been reported in hundreds of peer reviewed publications. Additionally, he contributed to the discovery and development of the following products and clinical candidates:

Dr. Mousa also was involved in the discovery of novel site-directed anti-alpha v beta 3 tumor radiotherapy and imaging, as well working on defining novel angiogenesis inhibitors. He also was involved in the discovery of novel pharmacological aspects of heparin and low-molecular-weight heparin, and contributed to the advancement of several key concepts, including the synergistic benefits of GPIIb/IIIa antagonists in combination with thrombolytics; the role of integrin alpha 5 beta 1 in angiogenesis and bacterial invasion of human host cells; and the role of fibrinolytic components such as kininogen in angiogenesis.

Dr. Mousa received a Ph.D. in Pharmacology from The Ohio State University, completed postdoctoral research in Cardiovascular Pharmacology at the University of Kentucky and earned his MBA from Widener University.

A native of Alexandria, Egypt, he received his B.Pharm. and M.Sc. degrees from Alexandria University. He was elected a fellow of the American College of Cardiology (FACC) and a fellow of the National Academy of Clinical Biochemistry (FACB), and is a member of several national and international societies. He was recently awarded grants through the U.S. Department of Defense and the National Institute of Health.

Dr. Mousa serves on the editorial boards and as a reviewer for a number of scientific and medical journals, including Journal of Pharmaceutical Sciences, Frontiers in Molecular Neuroscience, Clinical and Applied Thrombosis/Hemostasis, Applied Microbiology and Biotechnology, and PLoS Computational Biology.