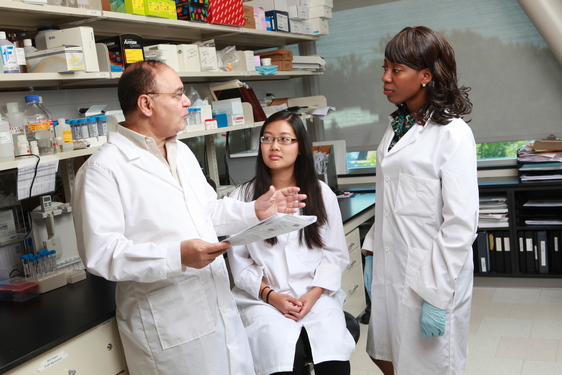 Dr. Shaker Mousa, Vice Provost of Research and Chairman of the Pharmaceutical Research Institute at ACPHS, has been named a 2017 recipient of the Kuwait Prize, one of the world’s most prestigious awards for achievements in science.

Sponsored by the Kuwait Foundation for the Advancement of Sciences (KFAS), the annual award recognizes lifetime contributions of Arab scientists across the globe. Dr. Mousa was honored in the category of Applied Sciences (Applied Medical & Applied Allied Health Sciences).

Since graduating first in his class from the College of Pharmacy at Egypt’s Alexandria University, Dr. Mousa has dedicated his career to advancing the pharmaceutical and health sciences. He holds more than 350 U.S. and international patents, and his work has been reported in an estimated 1,000 peer reviewed publications.

As a Research Scientist and Fellow at DuPont Pharmaceuticals Co. for nearly 17 years, he played a key role in the development of drugs that have been used to help tens of millions of patients, a list of which includes the popular imaging agent Cardiolite (also marketed as Miraluma).

Since being named the founding Chairman and Executive Vice President of the Pharmaceutical Research Institute (PRI) at ACPHS in 2002, Dr. Mousa has assembled a team of scientists with expertise in hematology/oncology; ophthalmology; neurology; and a range of cardiovascular and inflammatory diseases.

A list of PRI’s accomplishments over the past 15 years includes:

In recent years, Dr. Mousa and the PRI team have placed an increased emphasis on nanotechnology applications for health and medicine. Nanomedicine is an evolving field of biomedical research that has demonstrated great potential for improving drug and gene delivery.

NanoPharmaceuticals LLC, was formed in 2013 to develop Nanomedicines for the treatment of rare diseases. One of the company’s chemical compounds has already received two Orphan Drug Designations from the FDA – one for glioblastoma (a type of brain tumor) and the other for pancreatic cancer. Clinical trials are expected to begin in 2018.

“It is my great honor to receive the Kuwait Prize for Applied Sciences, and I wish to thank the KFAS for using this awards program to stimulate interest in the scientific community and help inspire further advances,” said Dr. Mousa. “I truly believe that science knows no boundaries. The only chance we have to find better therapies for complex diseases is for the global scientific community to work together, and I value being part of that process.”

“On behalf of the entire College community, I congratulate Dr. Mousa on this remarkable achievement,” said Greg Dewey, Ph.D., President of ACPHS. “The intent behind the formation of PRI in 2002 was to elevate the College’s research profile while at the same time expanding research opportunities for students. Through this award and his many other accomplishments, Dr. Mousa has helped turn this vision into reality, making PRI one of the region’s top centers for drug discovery and development.”

The Kuwait Prize was first awarded in 1979 and has grown in stature ever since its introduction. Award recipients are selected based on evaluations from local and international scientific institutions. Each prize winner receives approximately $130,000 USD, a gold medal presented by the Emir of Kuwait (Sheikh Sabah Al-Ahmad Al-Jaber Al-Sabah), a KFAS shield, and a certificate of recognition.

Joining Dr. Mousa as 2017 recipients of the Kuwait Prize are:

About Albany College of Pharmacy and Health Sciences
Founded in 1881, Albany College of Pharmacy and Health Sciences is a private, independent institution with a long tradition of academic and research excellence. The College is committed to educating the next generation of leaders in the health care professions and translating scientific discoveries into therapies that benefit humankind. In a study conducted by the Brookings Institution, ACPHS was named the #1 value-added college or university in the country. ACPHS has campuses in Albany, NY and Colchester, VT.