New research conducted by faculty and students from ACPHS and Albany Medical College has found that naloxone products used to reverse opioid overdoses may still meet standards for safe and effective use nearly 30 years after the expiration date. The research was published February 4, 2019 in the journal Prehospital Emergency Care.

“Given the critical role naloxone has played in saving lives during our nation’s opioid epidemic, these findings could have significant financial and public health implications for meeting the increasing demand for this important drug,” said Michael Dailey, M.D., chief of the Division of Prehospital Medicine and an emergency department attending physician at Albany Med, and professor of emergency medicine and emergency medical services at Albany Medical College (AMC).

The expired naloxone injection products used for the study were collected from EMS or law enforcement training supplies and expired returns. The expiration dates ranged from 1990 to 2018.

The researchers at Albany College of Pharmacy and Health Sciences (ACPHS) who performed the chemical analysis found that 11 of the 12 samples retained between 90% - 110% of their potency, the range designated by the United States Pharmacopeia (USP) as meeting the standard for safe and effective use. The one sample that fell short dated from 1992, and it narrowly missed meeting the standard, retaining 89.3% of the labeled amount of naloxone (see chart below). 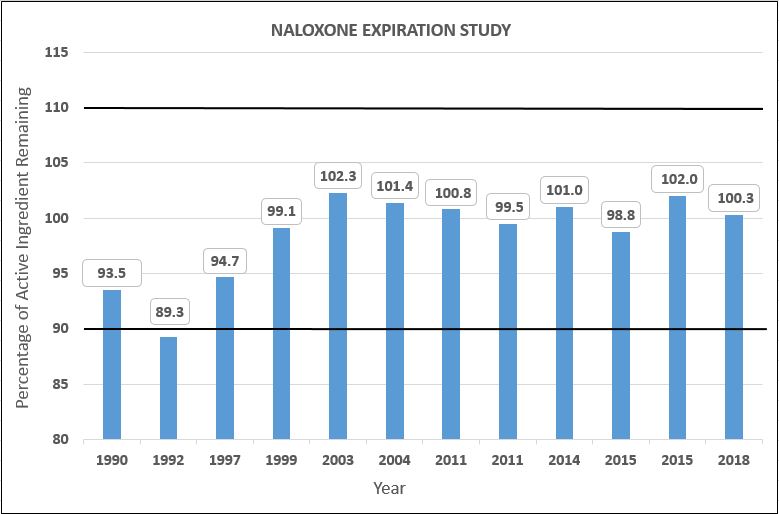 Naloxone is used in hospitals and by emergency medical service providers, and more recently has become more widely available through community access programs to people with a substance abuse disorder and their loved ones.

Naloxone works by crossing the blood-brain barrier and antagonizing opioid binding at the receptor level, thus blocking the pharmacological activity of opioids. It essentially reverses the respiratory depression caused by the opioid, which is the leading cause of death. Naloxone has been used to save over 26,000 lives since 1996.

“While other studies have examined naloxone stability for samples maintained at room temperature for up to a year past their expiration date, we analyzed naloxone exposed to real-world temperature fluctuations with samples stretching as far back as 27 years,” said Michael Brodeur, Pharm.D., professor at Albany College of Pharmacy and Health Sciences who has 25 years of experience as an EMT. “Our results demonstrate that naloxone injectable solution is consistently stable for nearly three decades.”

Despite the apparent stability of naloxone and its potential ability to maintain its potency far beyond the designated expiration date, researchers stressed that these findings do not advocate that expiration dates be ignored. “Further pharmaceutical, clinical and regulatory investigation should be conducted, particularly for new naloxone products with different formulations or routes of administration, to ensure that the product is still viable in various forms and storage conditions,” said Dr. Dailey. “A longer shelf life for these products will improve the financial burden and allow more lives to be saved.”

The authors on the study were as follows:

About Albany College of Pharmacy and Health Sciences
Founded in 1881, Albany College of Pharmacy and Health Sciences (ACPHS) is a private, independent institution with a long tradition of academic and research excellence. The College’s mission is to educate the next generation of leaders to improve the health of our society. In separate reports by The Wall Street Journal (2019) and the Brookings Institution (2015), ACPHS was named the #1 value-added college in the country. The College has campuses in Albany, NY, and Colchester, VT.

About Albany Medical Center
Albany Med, northeastern New York’s only academic health sciences center, is one of the largest private employers in the Capital Region. It incorporates the 734-bed Albany Medical Center Hospital, which offers the widest range of medical and surgical services in the region, and the Albany Medical College, which trains the next generation of doctors, scientists and other healthcare professionals, and also includes a biomedical research enterprise and the region’s largest physicians practice with more than 450 doctors. Albany Med is affiliated with Columbia Memorial Health and Saratoga Hospital to provide the largest locally governed health system in the region. Combined, these three hospitals offer nearly 1,100 beds and outpatient locations throughout the Capital Region. Albany Med works with dozens of community partners to improve the region’s health and quality of life. For more information: www.amc.edu or www.facebook.com/albanymedicalcenter.