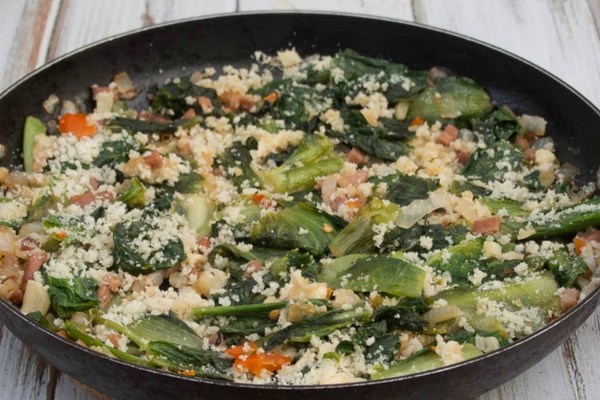 My wife recently came across this article about Utica Greens from The New York Times Cooking section. It brought back memories of one of my first alumni visits as president of the College when I traveled to Utica, NY, a bastion of community pharmacy.

Now, I am pretty much a meat and potatoes guy. As a boy growing up in Pittsburgh, I became adept at rearranging the vegetables on my plate to make it appear as if I had eaten more than I actually did. So imagine my surprise when I devoured my Utica Greens at this dinner with alumni, eventually going back for seconds and thirds as my hosts looked on approvingly.

My enjoyment of discovering Utica Greens that evening was only surpassed by the conversations I had with these alumni who told me about the role the College played in shaping their careers and lives.

One of the best parts of my job continues to be the meetings I have with members of our community, particularly our alumni and current students. At the recent ASHP Midyear Clinical Meeting in Anaheim, CA, I enjoyed breakfasts with members from each of these groups.

The alumni breakfast included a number of recent graduates, and it was impressive to see how they carried themselves, whether it was discussing their current jobs or networking with their colleagues. It was clear to me - and, for that matter, anyone who met with them - that their transformation from students to professionals was complete, and they were poised for great things.

Not only were our alumni front and center at ASHP, but so were our students. There were 39 ACPHS students who contributed to 26 research posters selected for display at the conference. These students were also busy attending sessions to advance their knowledge and interviewing for an array of residencies and internships - often with our own alumni.

The interactions I had with students and alumni at the conference were energetic and lively. That dynamic continued after the event when I stayed in California to meet with some local alumni, all of whom have retained strong ties to Upstate NY and fond recollections of their time at ACPHS.

I spoke with individuals who have held executive positions at companies such as Genentech and Kaiser Permanente, people whose careers in health care and the pharmaceutical industry extended the impressive trajectory of success I had just witnessed at ASHP. They stood as further evidence of the quality of an ACPHS education and the caliber of our students.

For years, Utica Greens had been known mostly to those with ties to Central New York, but today restaurants in New York City, Florida, and Las Vegas have them on their menus. The article in The New York Times has made this dish known to the nation and perhaps even the world.

In a way, ACPHS has not been all that different. Both our current students and alumni are increasingly landing great positions, moving into leadership roles, and representing the College well on the national stage. Just this past September, ACPHS was ranked as the number one valued-added college in the country by no less a source than The Wall Street Journal.

I recently talked to one longtime Albany resident who told me that she had been vaguely aware of the College for most of her life and is only now learning about the many good things we are doing. Like Utica Greens, we are no longer a best kept secret.