My wife Cindy and I traveled down to Milton, NY, to watch the ACPHS men’s and women’s cross country teams compete in the 2016 Hudson Valley Intercollegiate Athletic Conference (HVIAC) championship. It was a glorious late fall day and the drive to Milton showed off the beautiful scenery of the lower Hudson River Valley.

The spectator-friendly course stretched out over open, rolling land on the outskirts of the town. As I stood there watching the runners prepare for their races, I couldn’t help but think back to the “equipment” we wore when I was a runner in college. Each of us then ran in heavy leather shoes – yes, leather – which were made by one of two companies, Puma or Adidas. Besides being heavy, you didn’t want to be around those shoes when they got wet. They could really stink!

I still remember the day my coach brought in new shoes for the team that were made of nylon. I held these flimsy shoes in my hands and immediately questioned the coach’s judgment. The manufacturer was a company called Nike. I sincerely doubted they would be around for very long.

There was a bigger, more significant difference in those days. When I was running, there were no women’s cross country teams. In fact, there were very few women’s sports at all. Watching the women go through their final warmups last weekend, I couldn’t help but feel good about the progress that has been made over the years in providing greater opportunities for female student-athletes.

I suppose that’s why I was a bit surprised to find the men running an 8K course (5 miles) while the women’s course was 5K (3.1 miles). There is little doubt in my mind that our women – and for that matter, any of the women competing – could run another two miles. You might say these women are “Beyond 5K Ready” (sorry, I couldn’t resist). All kidding aside, I am unaware of any track and field event where women run shorter distances, so I am not sure why this happens in cross country. I hope that will change one day as well.

Regardless of the distance, it was an ideal day for running, and the course was in great shape despite the previous week’s rain and snow. The men ran first and our runners did great, placing second overall. They had to contend the whole way with an irritating swarm of green SUNY ESF jerseys and had not only some strong individual performances but a great team effort.

The women’s race followed, and we placed 1-2-3. Earlier in the race, I had overheard one of the SUNY ESF coaches saying of our women, “They started too fast. Our girls will catch them.” Well, they never did, and I secretly took joy in seeing him proved wrong. 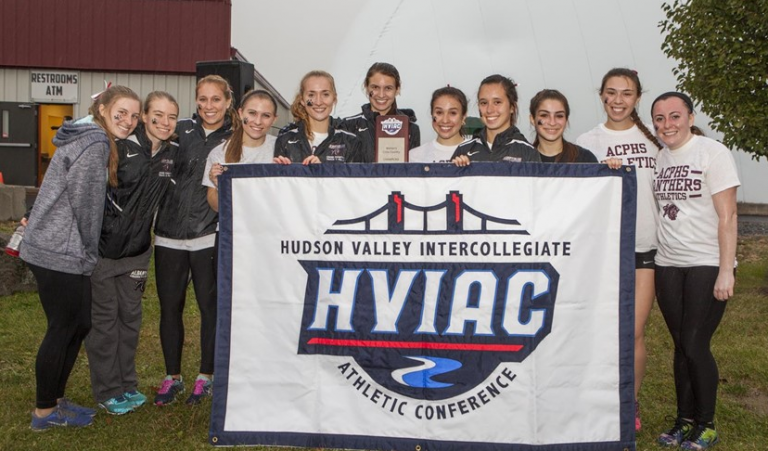 The course at Milton ends with a long uphill stretch. This type of setup makes for a difficult finish, particularly at the end of an exhausting race. As our runners charged up this last straightaway, some having to outkick a competitor, it reminded me once again of my cross country days. We had a favorite quote at the time from the poem “If” by Rudyard Kipling. It goes:

If you can fill the unforgiving minute
With sixty seconds’ worth of distance run,
Yours is the Earth and everything that’s in it,
And – which is more – you’ll be a Man, my son!

Despite the male-centric perspective of the last line, the sentiment embodied in this quote holds true for anyone. The memories I have from running cross country are some of the strongest of my college days. As I looked at our men and women recovering from their races, congratulating each other and happy knowing that they had given their best effort, I knew that this would someday be one of their fondest memories from ACPHS.

It’s already one of mine.