For Soccer Coach, Wins Are Only Part of the Story

Home Blog For Soccer Coach, Wins Are Only Part of the Story 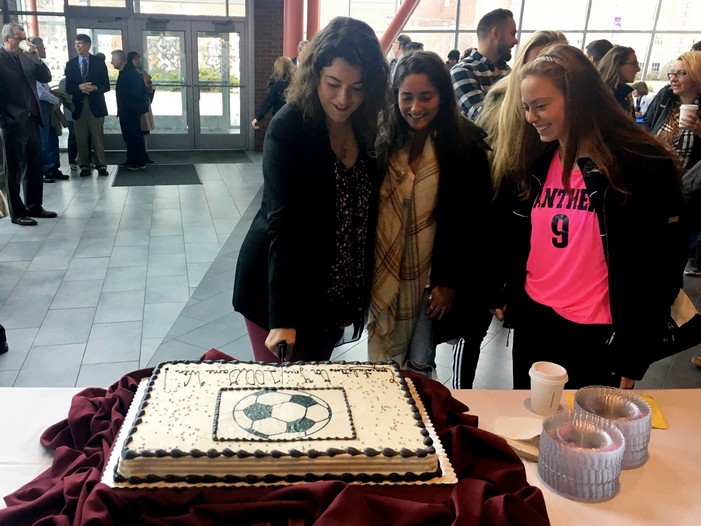 When Head Coach Christine Kanawada marked her 100th career victory in the 2018 season, it was just the latest milestone for the woman who has overseen a period of unparalleled success for the women's soccer program at ACPHS.

Kanawada has a .701 career winning percentage during her nine years as head coach, leading the team to four conference championships and six trips to the national Final Four. In 2017, she was named the national women’s soccer coach of the year by the United States Collegiate Athletic Association (USCAA).

These accomplishments are made more impressive by the fact that she never envisioned a career for herself as a coach. “When my daughter Alex was younger, she wanted to play on a local Under-12 soccer team. Before the season was about to start, we received a note that they would be canceling the program because they couldn’t find a coach,” she explains. At that point, the former Guilderland (NY) High School soccer player offered to step in and help. “I said, ‘I played soccer. I’ll coach the team.’” And the rest is history.

After coaching club soccer for five years, she was hired as an assistant coach at ACPHS. Two years later she was named the head coach and in 2016 she added Athletics Director to her title.

Now more than 15 years after her coaching debut, she can’t imagine herself doing anything else. “For me, it’s really about the student-athletes. They’re the reason I’m here, and why I love my job. The amount of things that they accomplish in a week is incredible. I don’t know how they find the time to maintain high GPA’s, practice every day, volunteer in the community, etc. It’s pretty inspiring.”

But it’s far from a one-way street. At a ceremony marking the coach’s 100th win (see photo above), students spoke affectionately of the woman they call their “school mom.”

Kanawada says, “It’s like coaching my daughters. We talk about soccer, but a lot of times we talk about life and the struggles they may be having academically or socially. I enjoy being in a position to offer that ‘mama guidance.’”

The coach not only forges strong relationships with her players, but with their families too. When the team was in Virginia Beach this fall for the USCAA national tournament, the parents of most of the seniors made the trip, even joining the team for dinners. “It’s a real family environment,” Kanawada says of the soccer program.

“Christine’s record speaks for itself, and it speaks loud and clear,” says former ACPHS Athletics Director and current Vice President for Administrative Operations, Packy McGraw. “But the real reason for her success is that she cares about her players as students, athletes, and human beings. She takes much more pride in their successes than she does in her own achievements.”

CHRISTINE KANAWADA BY THE NUMBERS