During my third professional year in pharmacy school, I learned about an opportunity to spend six weeks working at the National Institutes of Health in Bethesda, Maryland, the Mecca of clinical research – my true dream job (if it didn’t involve leaving Vermont!). I then set out to learn more about an experience that would be unlike anything I had ever known.

I should probably back up a bit. For those who don’t know, the final year of pharmacy school – the fourth professional year – is defined by a series of six week internships that are referred to as “Advanced Pharmacy Practice Experiences” (APPE’s) or “rotations.” These experiences are where we take what we have learned in the classroom and put it into practice. Which rotation sites we choose and the experiences we gain can play important roles in shaping our future career paths. 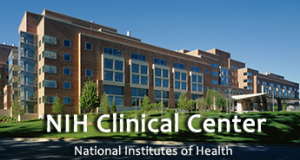 I met with my faculty advisor and discussed my interests and intent, and we decided that if I was going to take this step, I should really challenge myself and apply for the Infectious Disease rotation (Infectious Disease or “ID” tends to be one of the subjects that pharmacy students fear and try to avoid).

After submitting my C.V., a letter of intent, and a letter of support from my advisor, I was put in touch with the potential preceptor (i.e., supervisor) of the ID rotation. We discussed my research background and my career goals, and he informed me this would be like no other experience I would ever have. At the end of the phone call, he offered me the opportunity to join him for six weeks beginning in January of my APPE year.

As the time drew near, I began to grow anxious about the opportunity. This was a BIG deal – even if most people who I told about it didn’t even know what NIH stood for! I felt that I had so much to prove. I was just six months from graduating pharmacy school; I was seeking a pharmacy residency; and I chose an area of pharmacy in which I had no confidence.

Fortunately, my fears were put to rest on the first day of my rotation. My preceptor was incredible. He is the only pharmacist who works with the NIAID group, which is the National Institute of Allergy and Infectious Disease. This team consists of doctors, nurse practitioners, nurses, social workers, Ph.D’s, and many people from the various microbiology and biochemistry labs.

The patients seen by this team are invited to the NIH Clinical Center because they have acquired a unique fungal or viral infection whose predisposing cause has been determined to be a rare genetic defect in their immune response resulting in a primary immune deficiency. These defects vary widely, and in some cases there are only a handful of other people in the world who experience the exact same syndrome.

We also “rounded” with the HIV/AIDS team, which has their own group of pharmacists and includes Dr. Anthony Fauci. Dr. Fauci is the director of NIAID and has been instrumental in much of the research surrounding the discovery and treatment of HIV/AIDS.

As a pharmacist, my preceptor rounds with this team on Mondays, Wednesdays, and Fridays. During this time he is doing much of what a clinical pharmacist would do on any healthcare team: making sure drug levels are ordered and that the timing of these levels are appropriate and results are interpreted correctly; checking that the labs are within range; ensuring proper coverage with chosen antibacterials and antivirals; monitoring for drug-drug interactions; understanding the pharmacokinetics of the drug and when to expect a clinical response, etc. Despite the high caliber of the rest of the medical team, it was still amazing to see how much they rely on him to speak up when there are issues. 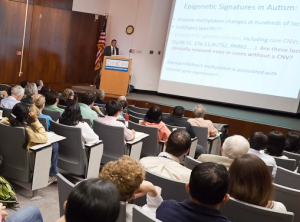 The other days of the week were spent attending weekly NIAID Grand Rounds, which included presentations from guest speakers and patient case reviews. I also participated in a pharmacology class, offered to students, interns, and employees of NIH (even those who were not in pharmacy). This was taught by a variety of researchers, pharmacists, and providers who are experts in the various areas. There were weekly Clinical Center Grand Rounds as well, featuring speakers such as Dr. Rachel Schneeron, who helped develop the vaccine for bacterial meningitis caused by H.flu type B (Hib).

One of the most important and meaningful parts of my experience was the time my preceptor spent educating me. Despite his busy schedule, he still found time EVERY day to meet with me for 2-3 hours. During this time we either completed a mini journal club or more often discussed a topic of infectious disease.

Even though the cases I was seeing at the Clinical Center were so rare I will probably never hear of or see them again in my life, he had an amazing ability to extrapolate these concepts to general ID principles. I would be assigned a reading topic based on something we had seen that day, and was then expected to come prepared the following day with the basics of epidemiology, treatment, pharmacokinetics, and monitoring of treatment. Other topics we discussed were less patient specific and covered the various classes of antibacterials and antivirals.

During this time, an amazing thing started to happen: I developed confidence and more critical thinking skills. I learned how a pharmacist should approach a patient case, what the medical team expects from a pharmacist, and where we can use our unique skill set to shine.

Before my time at the NIH, I was unsure of my ability to tackle topics that I had a harder time with during pharmacy school, or my capacity of retaining the critical information about pharmacology and pharmacokinetics that other providers can’t just look up.

This rotation and my preceptor’s nurturing and supportive teaching reassured me that I do have what it takes. Which came at a great time, as while I was at NIH, residency interview invites started rolling in. I learned a few months later that I was accepted into the PGY1 Residency Program at Fletcher Allen Health Care in Burlington, VT: My number one choice!

Molly Trayah graduated with her Doctor of Pharmacy (Pharm.D.) from the ACPHS-Vermont Campus in May 2014.