GETTING TO KNOW OUR NEW FACULTY

Home Blog GETTING TO KNOW OUR NEW FACULTY 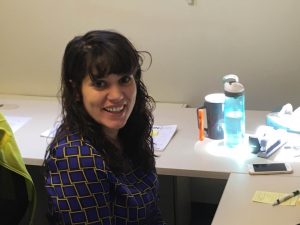 Dr. Jacqueline Cleary graduated from Furman University with a Bachelors Degree in Biochemistry in 2010 and received her Pharm.D. in 2014 from the South Carolina College of Pharmacy, MUSC campus.  She completed her post-graduate year one general pharmacy residency training with Sentara Medical System in Norfolk, VA and then completed her post-graduate year two pain and palliative care residency training at the Albany Stratton VA Medical center in Albany, NY.  Additionally, she completed the Albany College of Pharmacy and Health Sciences Teaching and Learning Program during her PGY-2 year.

Dr. Cleary is now an Assistant Professor here at ACPHS in the Department of Pharmacy Practice, and her current practice site is Hometown Health Center in Schenectady, NY.  Dr. Cleary serves as a clinical pharmacist specializing in primary care with a focus in pain management.  She is also an Adjunct Professor at SAGE Graduate School of Nursing and serves as the Pharmacology course coordinator there.

Recent national attention to the opioid epidemic has been an increasing subject of interest for Dr. Cleary.  She has numerous posters, publications and has presented both locally and nationally on the topic of naloxone distribution, naloxone legislation and risk mitigation strategies to reduce opioid abuse and misuse.

People will be surprised to learn in addition to her impressive professional and academic credentials, Dr. Cleary also rode horses competitively all throughout middle and high school.  She did eventing shows in South Carolina, North Carolina, Georgia, and Tennessee as well as hunter pace events.  Her favorites are show jumping and cross country and she hopes to take up riding again later this year, now that she lives closer to Saratoga.

Dr. J. Nicholas (Nick) O’Donnell studied at at Northeastern University in Boston, Ma and received his Doctor of Pharmacy degree in 2013. Following graduation, he stayed in Boston to complete a PGY-1 at Beth Israel Deaconess Medical Center. In the Fall of 2014 he moved to Chicago, IL to complete a 2-year fellowship with Dr. Marc Scheetz at Midwestern University/Northwestern Medicine. During his fellowship he focused primarily on pharmacokinetic modeling as well as pharmacokinetic/toxicodynamic relationships in animal models. While in Chicago, Dr. O’Donnell also completed a Master of Science in Clinical Investigation at Northwestern University.

Dr. O’Donnell joins us as a tenure track Assistant Professor in the Department of Pharmacy Practice. He will be conducting clinical translational research focusing mainly on antimicrobial pharmacokinetics and pharmacodynamics as well as optimal treatment of infections caused by multi-drug resistant Gram-negative pathogens. He will also be precepting APPE students on clinical rotations at Albany Medical Center, with a primary focus on antimicrobial pharmacokinetics and appropriate antimicrobial therapies.

Towards the end of his time at Northeastern University, Dr. O’Donnell started research on adverse effects of sedative agents with Dr. John Devlin. Dr. Devlin encouraged him to look beyond clinical pharmacy and into the world of pharmacy research. He credits working with Drs. Chris McCoy and Betsy Hirsch on an inpatient Infectious Diseases rotation for piquing his desire to pursue further training in the field of ID.

Dr. O’Donnell is a diehard New England Patriots fan, and he does not believe that Tom Brady told anyone to deflate anything. However, Dr. O’Donnell’s assertion that we all learned about the Ideal Gas Law in high school has had no impact in reversing Tom Brady’s four game suspension.