The lone woman was Sarah Simonet. Sarah, the daughter of Irish immigrants, lived in Croghan, NY, a tiny town at the western edge of the Adirondacks. Croghan is still a small town; its population today is just 161.

At the age of 16 or 17, Sarah married a farmhand who was 12 years her senior. Over the course of the next six years, they had four children. Imagine being the mother of four children by the age of 23! It's a life that seems unlikely today, but it was more common back then. That was one of the few common things about Sarah.

Sarah enrolled at ACP when she was 26 years old. The pharmacy program at the time was just two years, and following her graduation in 1883, Sarah returned to Croghan. She and her husband had started a general store, and shortly after Sarah's graduation, they added a pharmacy.

Sarah subsequently attended the University at Buffalo where she would go on to earn her medical degree. Returning to Croghan she became known as the "lady physician" and dedicated the rest of her life to treating the residents of her medically underserved area. She was held in such high esteem by the town that an historical marker now stands in her honor. 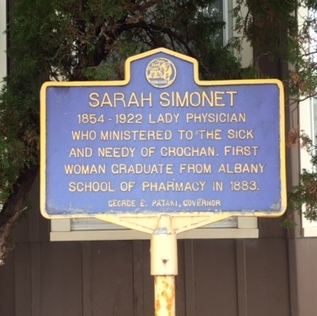 Sarah had a remarkable career by the standards of any era. She is especially noteworthy because she combined the practice of pharmacy with the practice of medicine. She also was completely dedicated to caring for a medically underserved population.

Fast forward to the present day. We have a crisis in primary care, both nationally and here in New York State. Let's consider HPSAs for PCPs. It sounds like alphabet soup, but those acronyms stand for Health Professional Shortage Areas for Primary Care Physicians.

But lack of primary care physicians is not the entire picture. Lack of access is also a major problem. If a person is on Medicaid, 38% of the primary care physicians will not accept them as a new patient. However, if that same person has private insurance, the number drops to 18%. The system clearly does not favor Medicaid patients.

Complicating this situation is the fact that primary care physicians are "aging out." It is estimated that one-third of them will retire in the next 10 years. This means that the problem will likely get worse before it gets better.

What is to be done to address this crisis? It is clear that we need to rely on other health professionals to step up and help fill this void. Nurse practitioners (NPs), physician assistants (PAs), and pharmacists must play a greater role in our health care system. Pharmacists, in particular, are one of the great untapped resources of the health care system. Medication is central to the practice of medicine, and nobody knows medication like a pharmacist.

To meet primary care needs, we also need to work more collaboratively in interprofessional teams where NPs, PAs, and pharmacists take on increased responsibilities. Community-based organizations will also play increasingly important roles in wellness and preventive medicine. In short, we need to operate as a community and coordinate our activities.

Even before the January opening of our second student-operated pharmacy (College Parkside Pharmacy) in Albany, we began working with A Village and other community partners to ensure the services we offer at the pharmacy are best aligned to the needs of the local neighborhoods. Those efforts will soon be complemented by "The Collaboratory," a laboratory for collaboration where we will provide additional clinical and community health services to a predominantly Medicaid population.

These offerings are not intended to replace primary care, but they may serve as a new model for how to best handle low acuity conditions and avoid unnecessary (and often costly) trips to the emergency room. And our students will get an unparalleled educational experience in the process.

Sarah Simonet figured it out more than 120 years ago. By merging pharmacy and medical expertise in one location, we hope to best serve our local community. So that's the vision. To follow Sarah.