On May 14, the College marked two historic firsts – we held our first-ever joint commencement exercises of the Albany and Vermont campuses, and we hosted that ceremony in a new venue, Saratoga Performing Arts Center.

These three, very different individuals share a common desire for advancing health care and a willingness to take risks. However, each pursued a distinctive and defining path towards achieving his goals.

Dave Stack, ACPHS class of 1976, started his career as a community pharmacist. But after several years, he aspired to help people on a much larger scale. He left community pharmacy for the pharmaceutical industry and eventually found himself as part of the team that launched Zantac, the heartburn medication that was once the largest selling product in the history of the pharmaceutical industry. In his current role with Pacira Pharmaceuticals, Dave continues to help thousands of people around the world with the medication EXPAREL which is used to relieve pain during surgery or medical procedures. 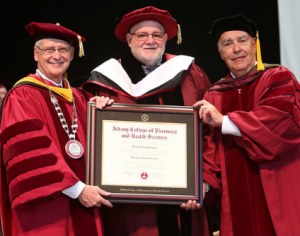 Dr. Bob Paeglow was enjoying a successful career as a radiation safety specialist when he went on a medical mission to Kenya in his mid-30’s. Upon his return, he had a vision to start a clinic to care for the medically underserved residents of Albany’s West Hill community (the neighborhood where he grew up). He enrolled in medical school at the age of 36, graduated cum laude, and opened Koinonia Primary Care clinic 15 years ago. The clinic serves anyone who walks through its doors, regardless of their ability to pay. In a world that has become increasingly technological and impersonal, Dr. Bob’s compassion reminds us that there will always be a role for humanity in health care. 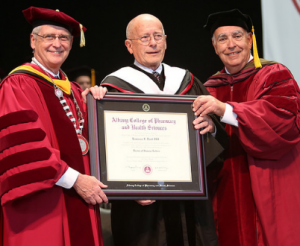 The honorary degree recipients in many ways mirror the members of the Class of 2016. Through their academic work and various community service activities, this year’s graduates have demonstrated a desire and ability to help others, and their future plans illustrate the many different ways this can be accomplished.

Members of this year’s graduating class are headed to settings that include hospitals, pharmacies, clinical laboratories, research institutes, and the pharmaceutical industry. More than two dozen are pursuing residencies or fellowships, while still others are headed to graduate or professional schools.

And for me, that’s the great benefit of the ACPHS education. It is has the rigor, the breadth, and the flexibility to be applied in a range of environments and across various disciplines, all within the broad spectrum of human health.

I congratulate each of the members of the Class of 2016 on their achievements, and I look forward to following their progress in the years to come.

Just as our three honorees could not have anticipated their career paths, we cannot anticipate the full range of career trajectories that our new alumni will take. The one thing we do know, however, is that their ACPHS education will serve them well wherever they go and whatever they do.