Home Blog BEHIND THE VENEAR

The unrest in Ukraine and the Crimea is a topic dominating the news today, but the region’s troubled history stretches back much further than the past few weeks.

In 1920, shortly after the end of WWI, Russia was plagued by a terrible famine. Future ACPHS Alumnus Steven Venear (Class of 1925) would play a key role as a leader of the American humanitarian mission that provided aid to the area.

In many ways, Venear was the ideal person for such a job. 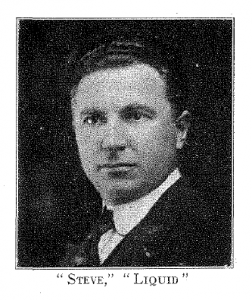 Steven Venear’s photo from the 1925 Albany College of Pharmacy yearbook.

He had a military background after serving in the U.S. Army in World War I. Following an honorable discharge, he was made captain in the Medical Corps of the American Red Cross, where he gained experience in humanitarian service. He was also a native of Russia, having immigrated to the U.S. in 1908 at the age of 21.

When the U.S. formed the “American Relief Expedition,” Captain Venear was among the first people sent to the Crimea in 1921. He was responsible for overseeing the safe delivery of food shipments, especially those going to the centers feeding starving children.

In less than 10 months, the food stations he directed were able to return the area to its pre-war conditions.

The efforts of Captain Venear were widely recognized and appreciated by the Russian government and its people. Among many honors, he was given the Order of St. Wladimir Award by the commander-in-chief of the Russian Army (Crimea), a figure of stature comparable to our George Washington.

Captain Venear, who was already a trained nurse, returned to the Albany area following his work in Crimea and entered Albany College of Pharmacy. After graduating in 1925, he and his wife moved to nearby Altamont, NY, where he would operate a local pharmacy until his retirement in 1954.

Special thanks to Marijo Dougherty whose wonderful article about Captain Venear in the Altamont Enterprise was the source of most of the information in this post.